You are here: Home / Seafood / Cod with Asian Orange Glaze

Cod with Asian Orange Glaze combines all the wonderful flavors of the East with ginger, sesame, soy and the sweetness of oranges. 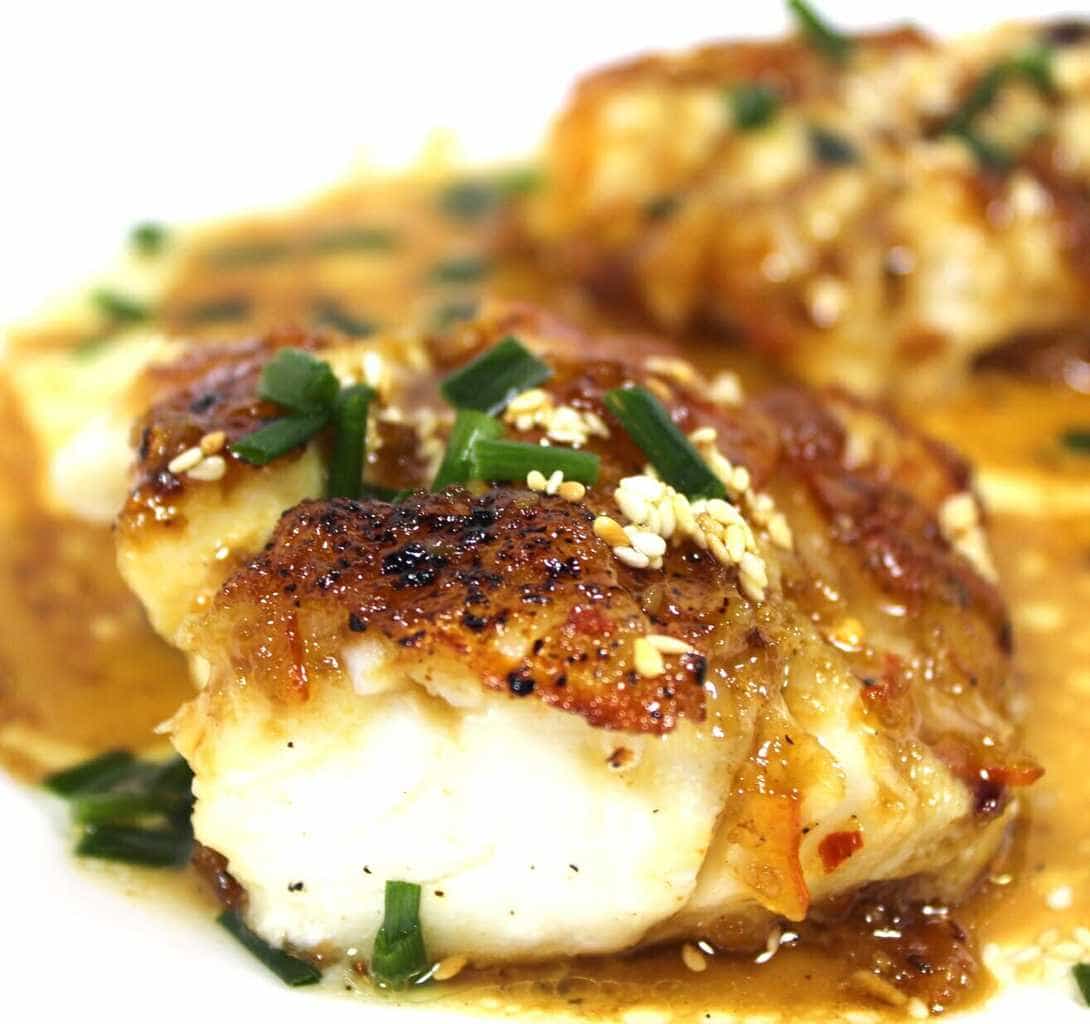 About Cod with Asian Orange

By nature cod is a mild, tender fish but you could almost say it tends toward blandness.

It really needs dressing up.

So in the past I’ve made all kinds of sauces from basic lemon-butter to creamy white sauces to dill sauces to a Mediterranean tomato sauce.

I’ve even encased cod in crushed pistachios. All different and all good.

But recently I decided to spice it up even further with a spicy orange glaze.

I saw a recipe similar to it using shrimp, so I thought why not cod?

And to further give this sauce a depth of flavor, I added a bit of miso, along with ginger, some soy and sesame oil and a zing of orange.

I had just bought the most lovely orange marmalade and I knew it would be perfect in this sauce.

Kind of a PF Chang’s kind of dish. Although at Chang’s the sauce usually accompanied chicken and it was often crispy and deep fried.

But this special sauce was going to go over moist, tender cod.

So let’s make it.

How to Make Cod with Asian Orange Glaze

My favorite way of cooking fish is to pan fry it just for a few minutes and finish it off in the oven.

So first, preheat your oven to 400 degrees.

Stir until thoroughly combined and just beginning to boil. Then set aside.

Next, add oil to an oven proof frypan and turn the heat to medium high.

As it warms, pepper both sides of the cod and add it to the frypan.

Saute the cod 3-4 minutes until browned.

Flip the filets over and spoon about a tablespoon of sauce over each filet.

Then place the pan in the oven and bake the cod 5-6 minutes until the fish flakes easily with a fork.

Add the filets to a serving plate. Spoon the remaining sauce over the top and serve.

Is frozen fish as good as fresh? Phys.org has an interesting article about this debate.

I always thought fresh fish was my first thought but after reading this article now I’m not so sure.

Your first thought may be that fresh fish is always the best.

Usually, I would agree but only if you lived near the ocean and the catch was brought in first thing in the morning.

If not, that fresh fish could take up to three days to reach the store.

And three day old fish doesn’t appeal to me.

The second choice is previously frozen and I’ve balked at that because I knew I’d have to cook that fish immediately.

So that leaves the third choice of frozen which means that as soon as the fish is caught it’s flash frozen on the ship.

It’s the closest thing you really can get to fresh.

Whatever you decide, it’s always best to search out a reliable store where the fish counter smells fresh like the sea.