Savory Porkchops and Apples are perfect for Fall when apples are abundant. Whether Gala, or Honeycrisp, or Fiji, or Granny Smith, all  apples are great. 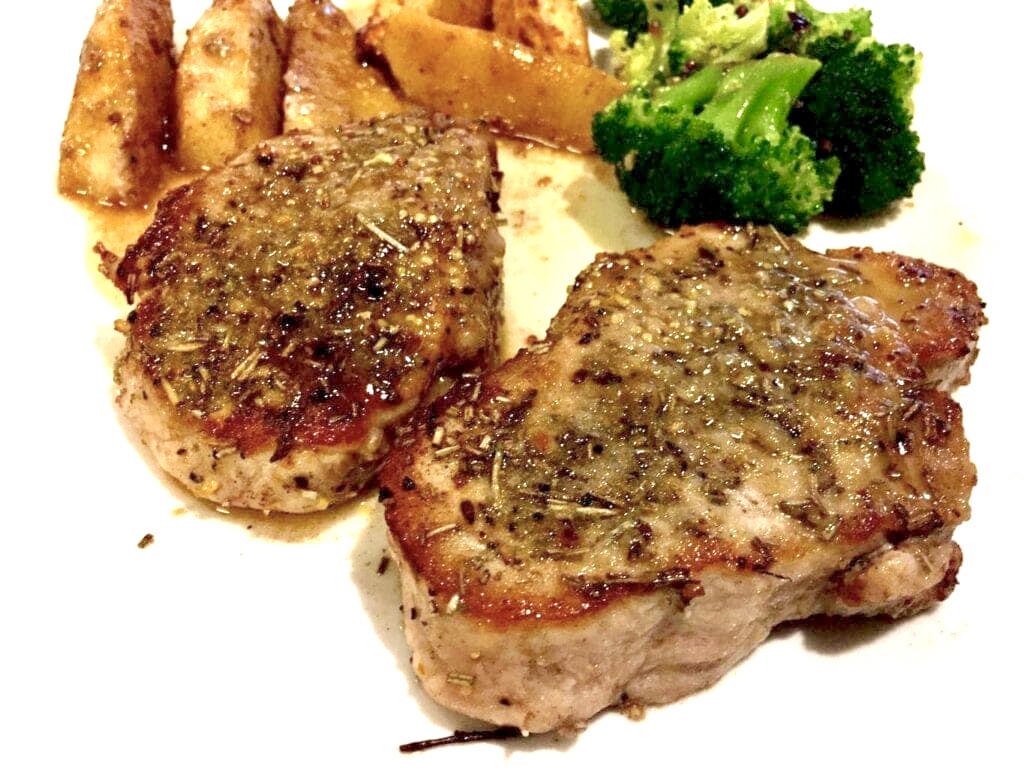 About Pork Chops and Apples

I’m married to a boy from the South who was brought up on good ol’ Southern food and one of his favorites is pork chops.

Both his grandmother, Nanny, and his mother were Masters of Southern recipes.

Although, truth be told (and he even admits it) that the dishes, although delicious, weren’t always the healthiest.

Like, for instance, pork chops fried in lard and bacon grease and then smothered under loads of gravy.

So, since he wanted pork chops the other day, I said, “You bet!” 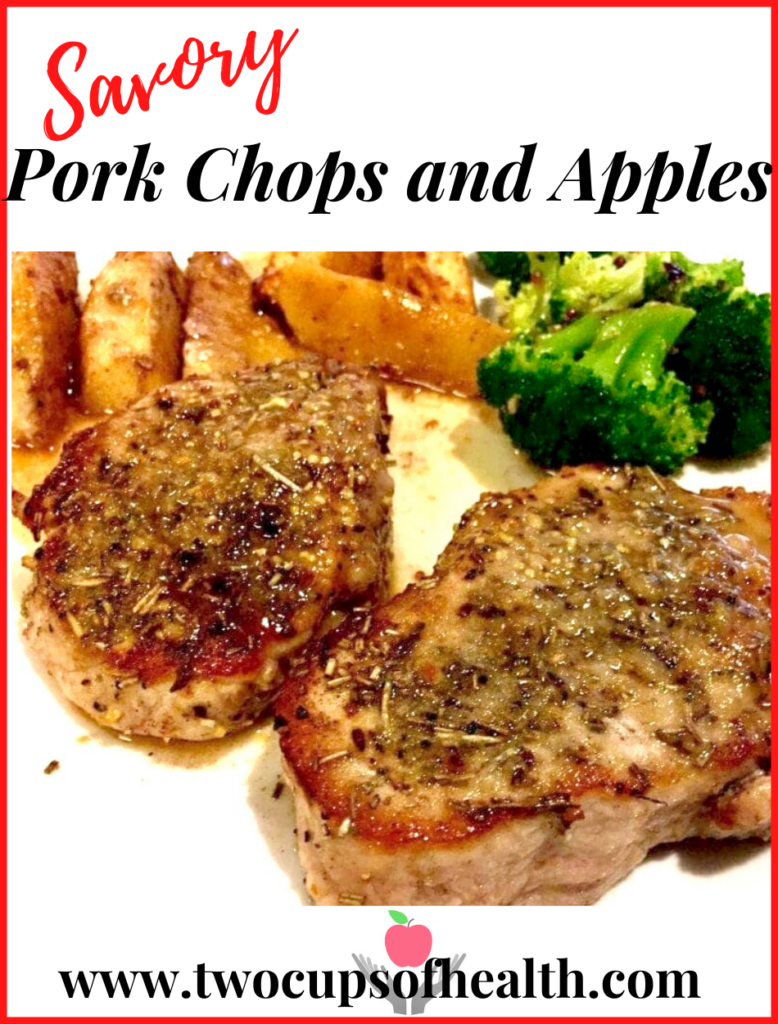 Had to make a few changes though, starting with the lard and bacon grease.

Substituted olive oil and seasoned them well with my favorite pork spices that I learned about when I took a class at the CIA (Culinary Institute of America) in Napa.

Then, instead of frying them, I did a quick sear on each side and finished them in the oven.

I also turned the thick gravy into a much lighter sauce.

And because, no decent Southern dinner, is not complete without dessert, I knew we had to do that as well.

Southern Living had an amazing Old Fashioned Apple Pie recipe, that would be perfect with these pork chops.

But I lightened up with just the apple portion of the pie.

The result was this Savory Pork Chops and Apples recipe.

My husband not only loved it, but he’s asked for it over and over again.

How to Make Savory Pork Chops with Apples

Next, peel and thickly slice 1 large apple and place in a bowl. 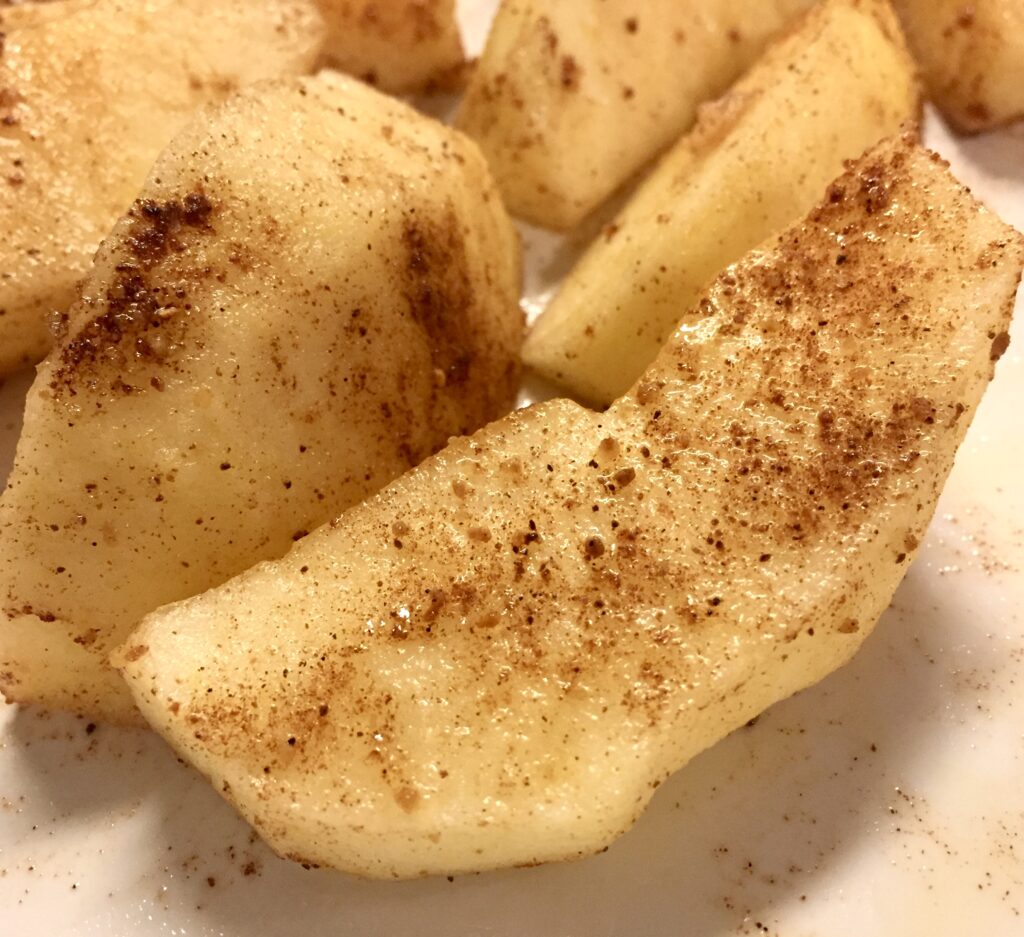 Place apples in an oven proof dish and bake in oven for 30 minutes.

While the apples are baking, pat the pork chops with a paper towel to remove moisture. Then rub them with 1/2 tsp olive oil.

Season on both sides with salt, pepper, rosemary, sage and fennel. 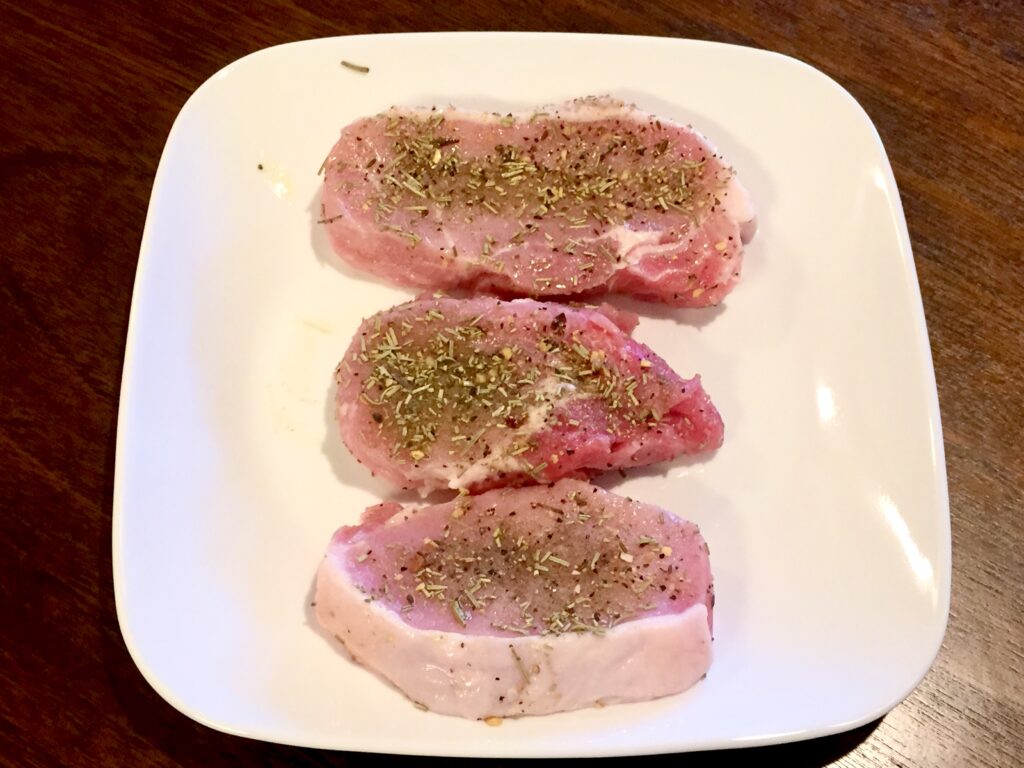 (This was the seasoning that Chez Panisse used to season their pork loin lunch they served to us at the Culinary Institute of America.)

It’s been my favorite season for pork ever since.

Next, lightly sprinkle the Wondra flour over both sides of the pork chops.

Add olive oil to a a frypan over medium high heat and quickly sear the chops about  3-4 minutes.

Remove the chops to a plate.

When the apple slices have reached the 30 minute point, place the pork chops on top of the apples with the browned side up.

Continue to bake the chops about 15 minutes or until the pork chops register 145 degrees.

Then remove the apples and pork chops from the oven and tent with foil to keep warm while you make the sauce.

Heat the pan you cooked the pork chops in to medium high.

Then deglaze with White Wine whisking up the browned pieces in the bottom of the pan.

Let the sauce reduce by half, about 3 minutes.

Then whisk in the butter and let it cook another 2 minutes until the sauce has thickened a bit.

To plate, add half the sauce to each plate and place a pork chop on top of the sauce.

Add the apples along the side and serve.

You can use any type of apples you’d like.

Usually a more tart apple like Granny Smith is used for pies, but personally I like them all.

What’s  really amazing is that worldwide there are over 7500 varieties of apples.

And the best  part about all those 7500 varieties is how healthy they are for you.

When I was doing research for my book  Natural Healing Foods,  I discovered a huge number of clinical studies that had been done with apples and various illnesses.

For instance, the University of Massachusetts-Lowell, discovered that apples and apple juice is beneficial when it comes to brain health and may help diminish symptoms of Alzheimer’s disease.

Another study from Cornell University came up with the same conclusion – that it not only was beneficial for Alzheimers, but for Parkinson’s as well.

Cornell also discovered that apples may be beneficial to prevent breast cancer tumors.

The key is Quercetin, a flavonoid found naturally in apples.

Also according to the State University of Rio de Janiero, apples are also beneficial for weight loss.

If you liked this recipe, be sure and pin it on Pinterest! 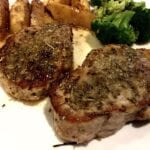