You are here: Home / How to / Clarify Butter the Easy Way

Clarify butter the easy way with this fast and simple method. 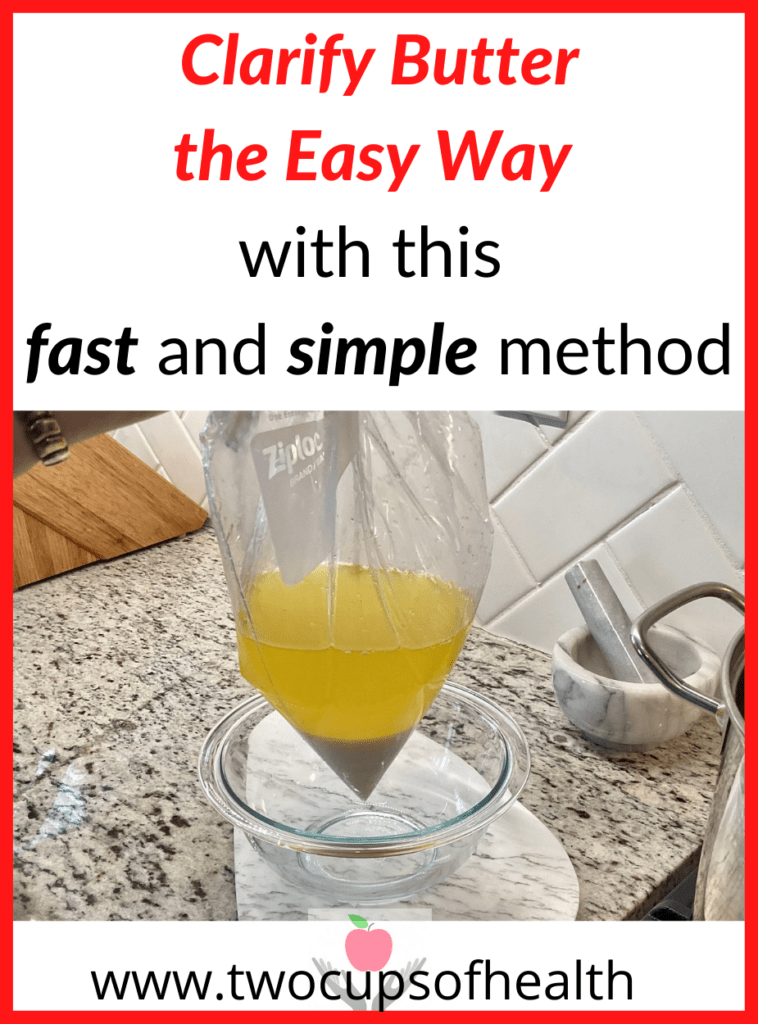 I mostly use olive oil and vegetable oil for cooking.

But for deeper flavor I truly love cooking with clarified butter, also known as ghee.  This is simply butter with the milk solids removed

Why would you do this? When you remove the milky solids, the clarified butter now has smoking point that is very high and you can use it for sautéing food without being concerned with burning.

Plus, as opposed to oil, the taste is so much richer.

The methods of clarifying butter in the past dealt with slowly melting the butter in a pan, being careful not to brown or even burn it.

Then came the messy part of having to strain it through cheese cloth.

When I say messy, I’m not kidding. I’ve done it once and lost so much butter that remained in the cheesecloth, that I said, “No more!”

So, I resorted to buying butter that was already clarified.

Just recently however, I discovered an easy, foolproof way to clarify butter with virtually No mess and No waste.

And the best part about this method is that you save money.

At a grocery store the cost of clarified butter is pricy – over twice as much as buying regular butter.

So, let me show you this easy, inexpensive method.

How to Clarify Butter

You really only need three things. A large pot of water, a Ziplock gallon bag and, of course, butter. 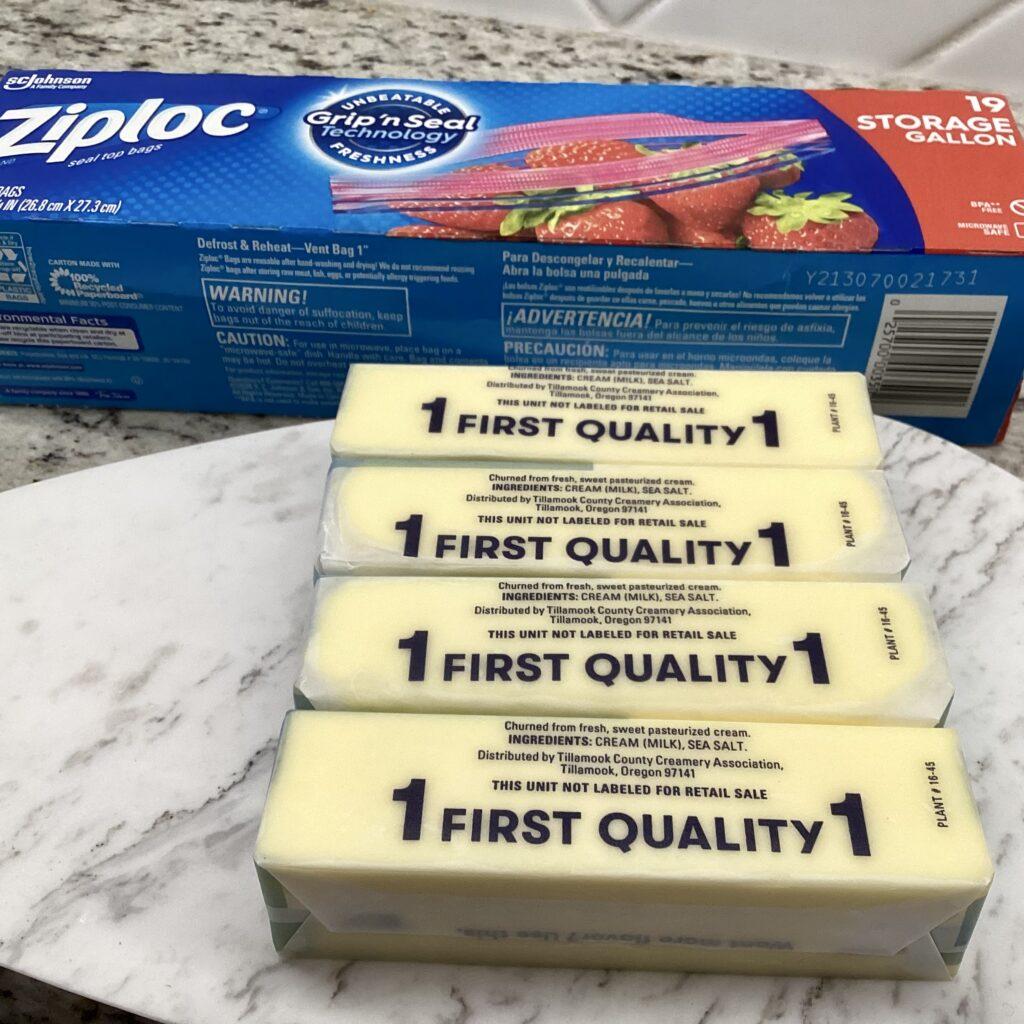 Well, four if you count the rubber band.

To begin with just bring a large pot of water to a simmer over medium heat. 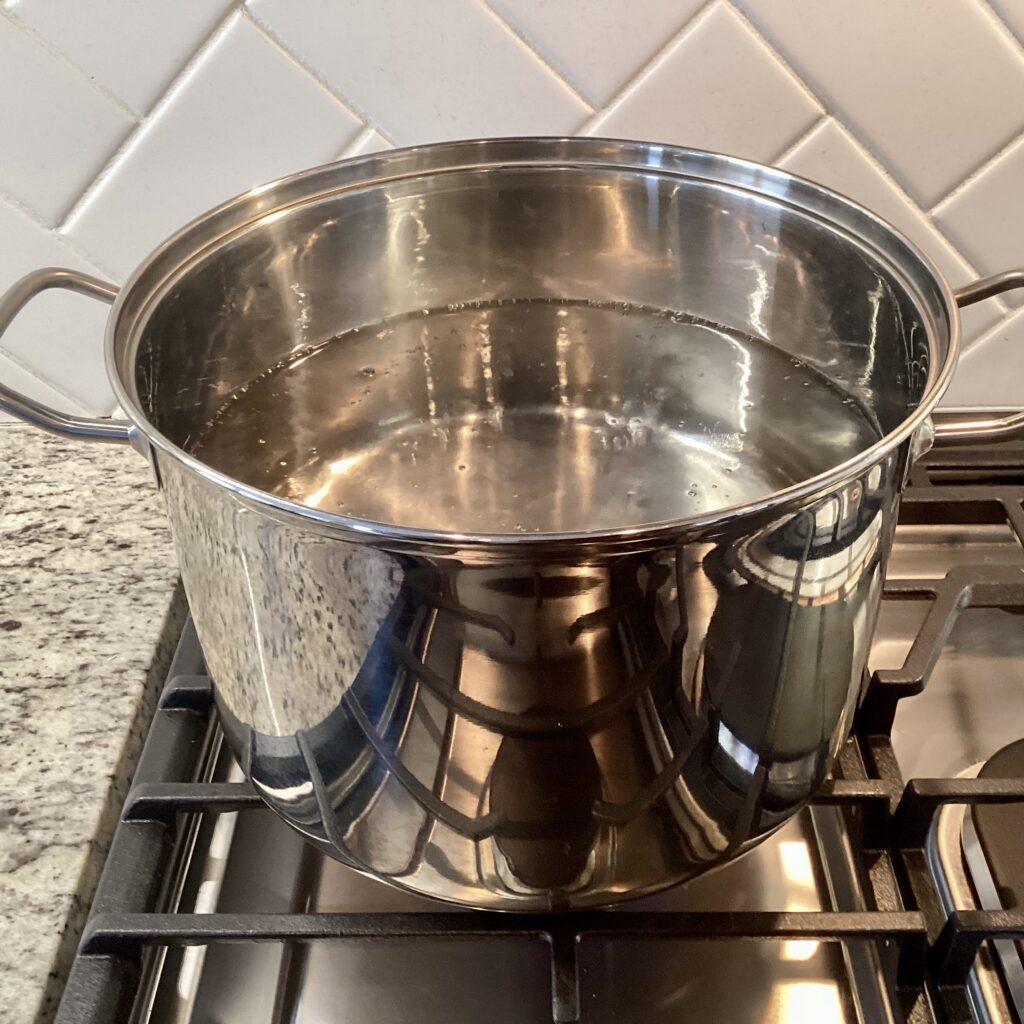 Then add a pound of butter to a ziplock gallon bag, and be sure to zip it tightly. 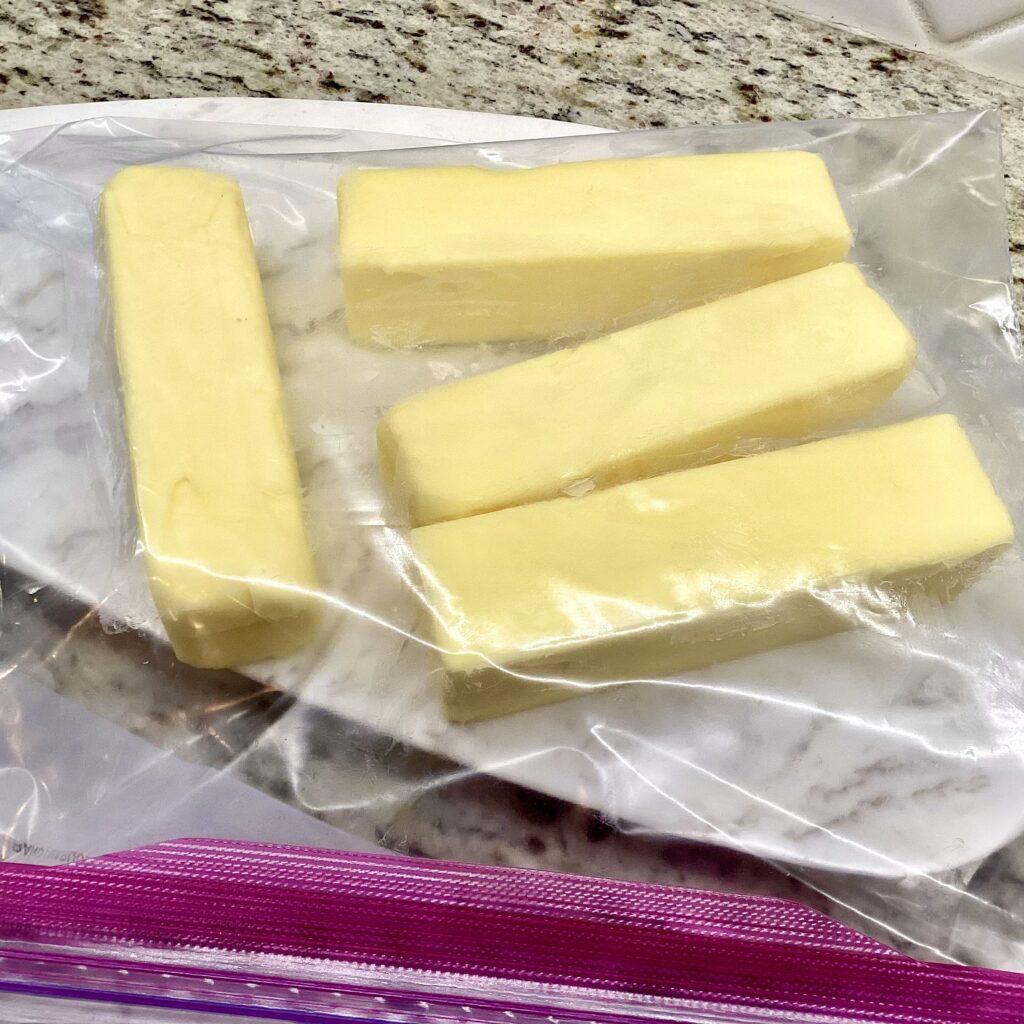 Carefully place the zipped bag in the simmering water and let the butter slowly melt. This will take about 15-20 minutes. 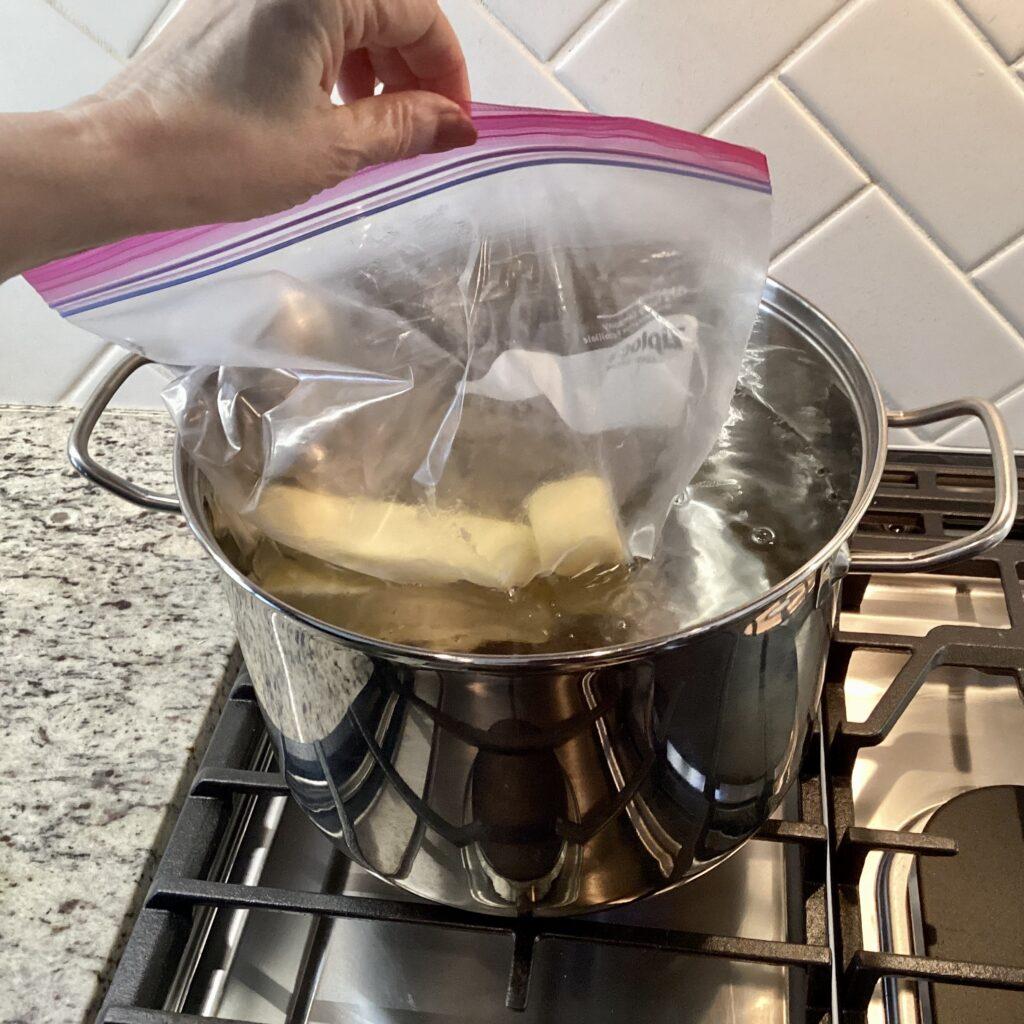 Then, remove the bag with melted butter. As you hold the bag, tilt it with the pointed side down and you can see how the milk solids (the part of the butter that can easily burn) have already separated from the clarified butter above it. 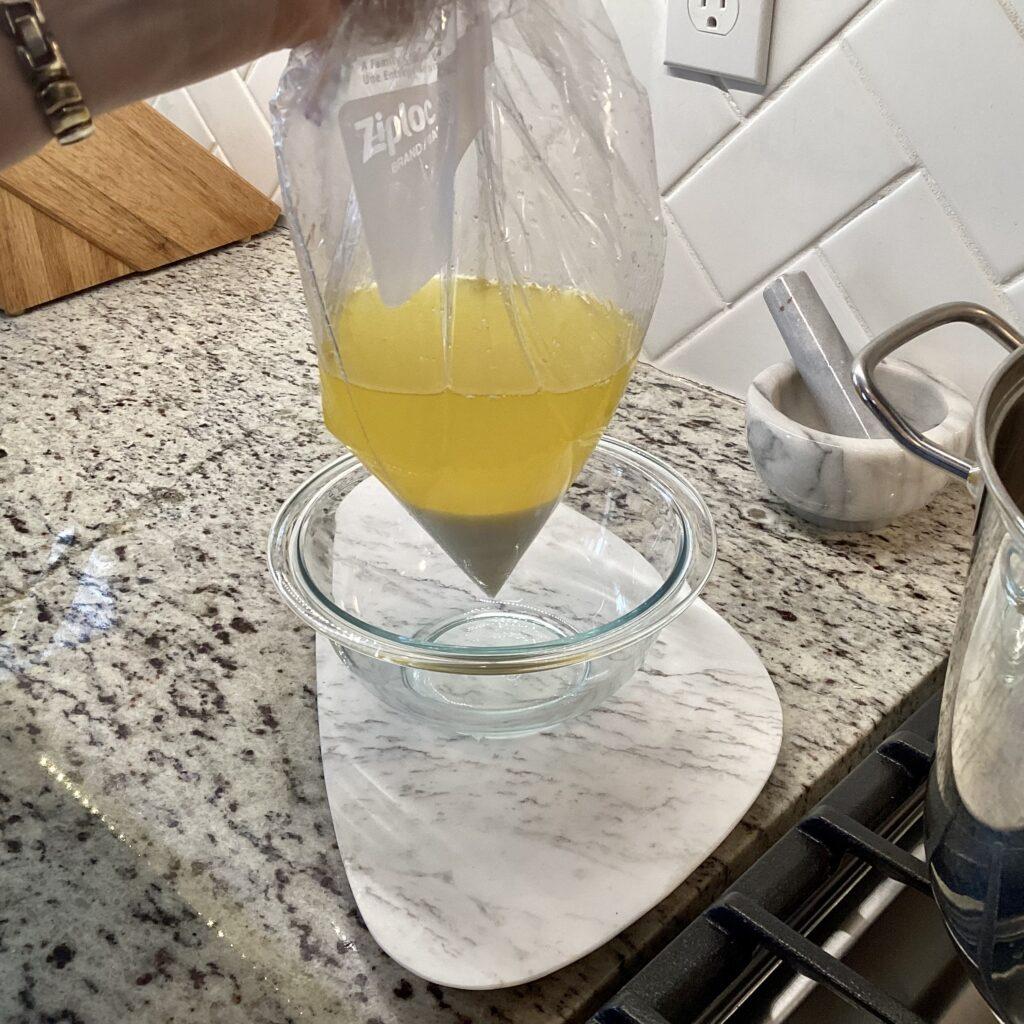 Next, add that zipped bag to a small bowl keeping the pointy side down.

As you can see, I have used a small vase that works easily for this purpose and I secured the top with a rubber band to make sure that the pointy end doesn’t squish down. 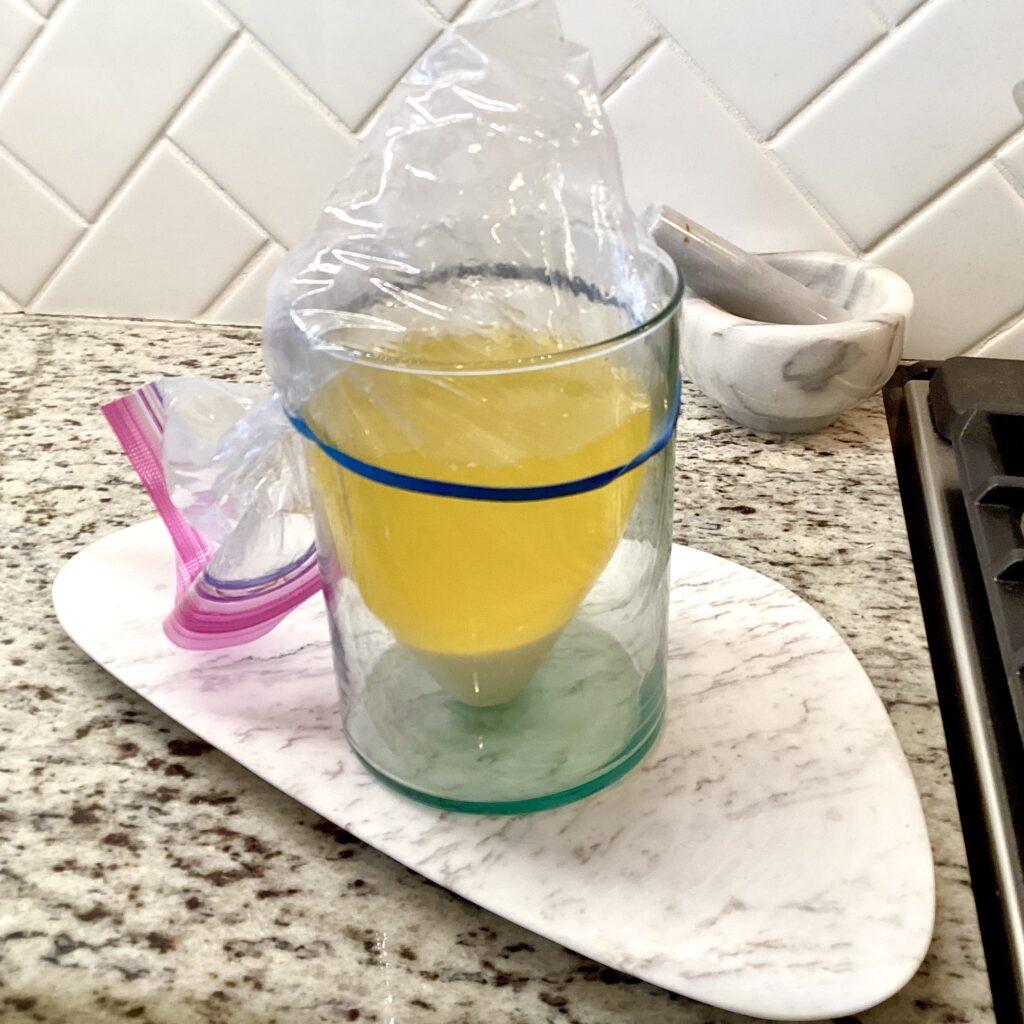 Then just add the butter and the container to the refrigerator so that the butter can solidify once again.

After a few hours when it’s  it’s solid, you will see that the liquid milk solids in the bottom had remained in the pointy end of the bag, where the now the clarified solid butter is at the top.

Over the sink, clip off the pointy end of the ziplock bag snd let the milk solids drain out. 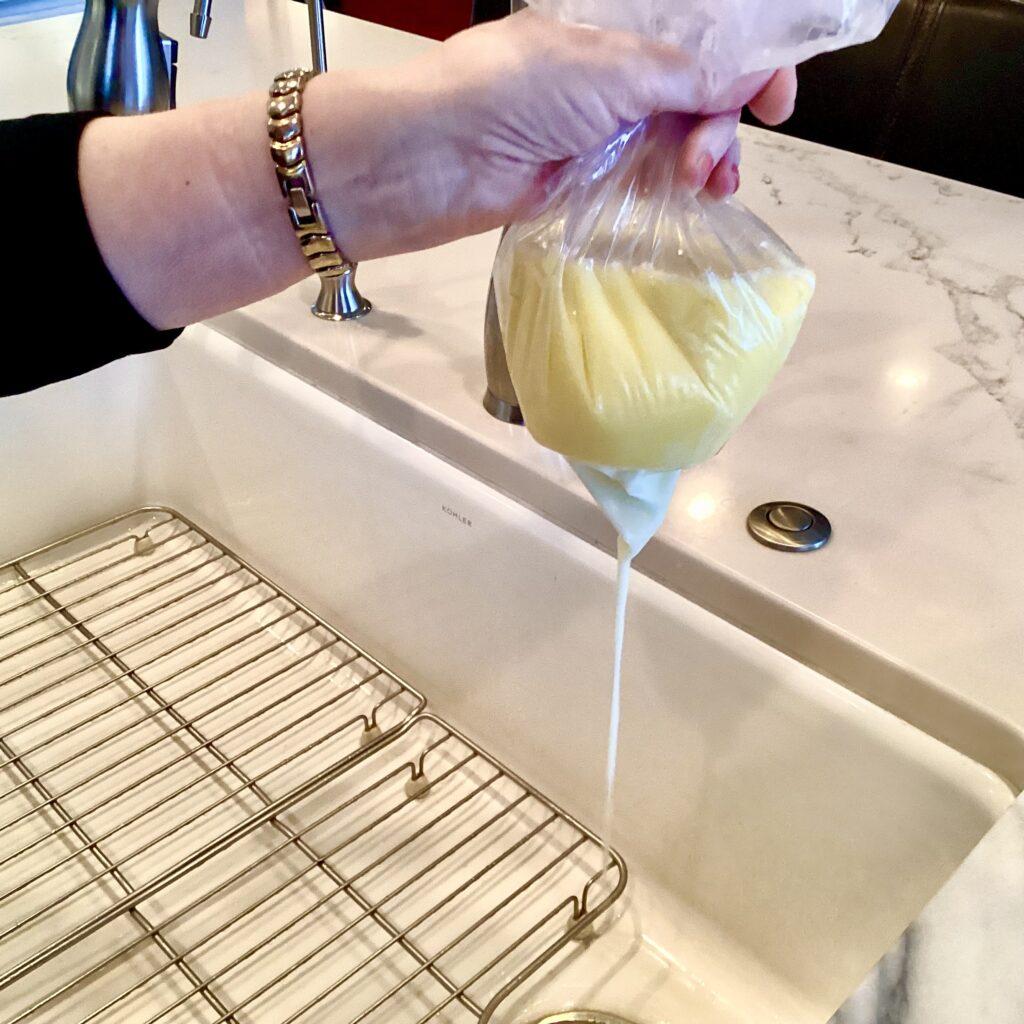 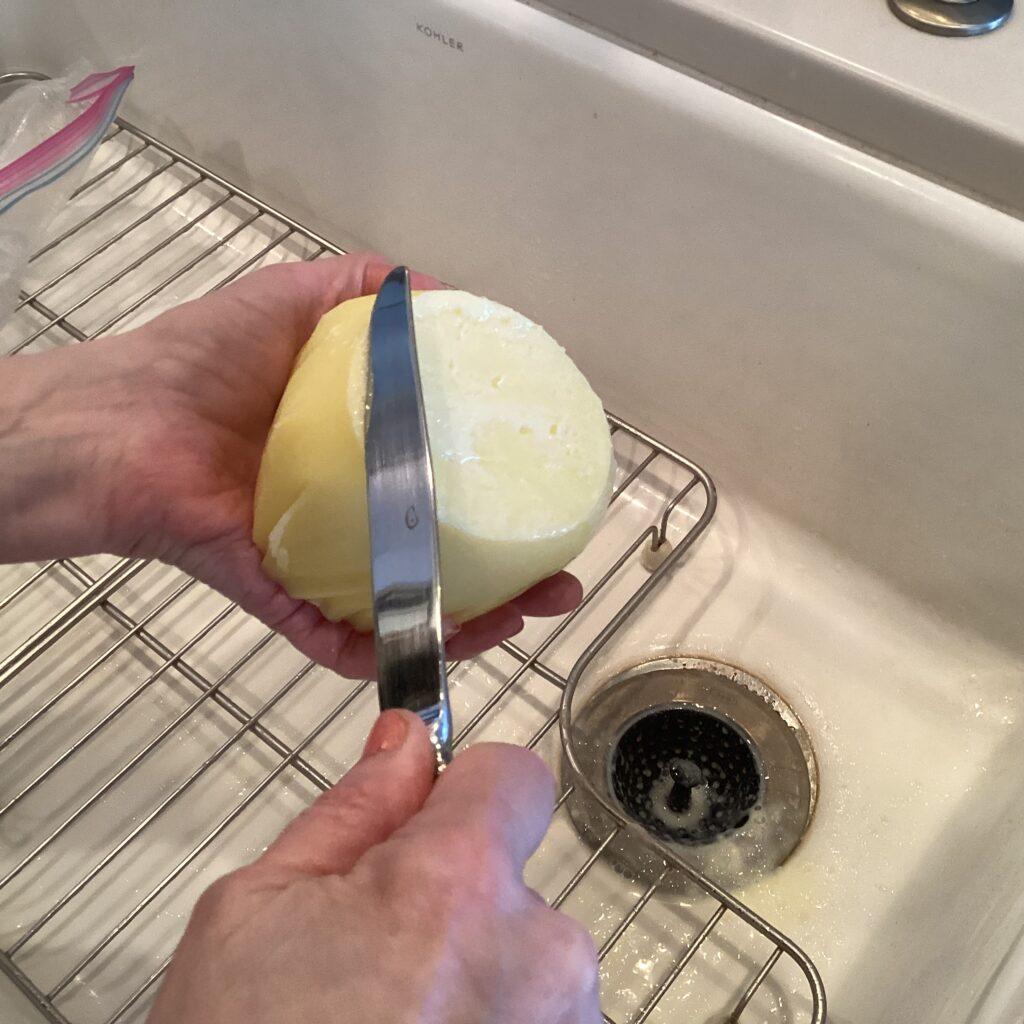 These can easily be scraped off. 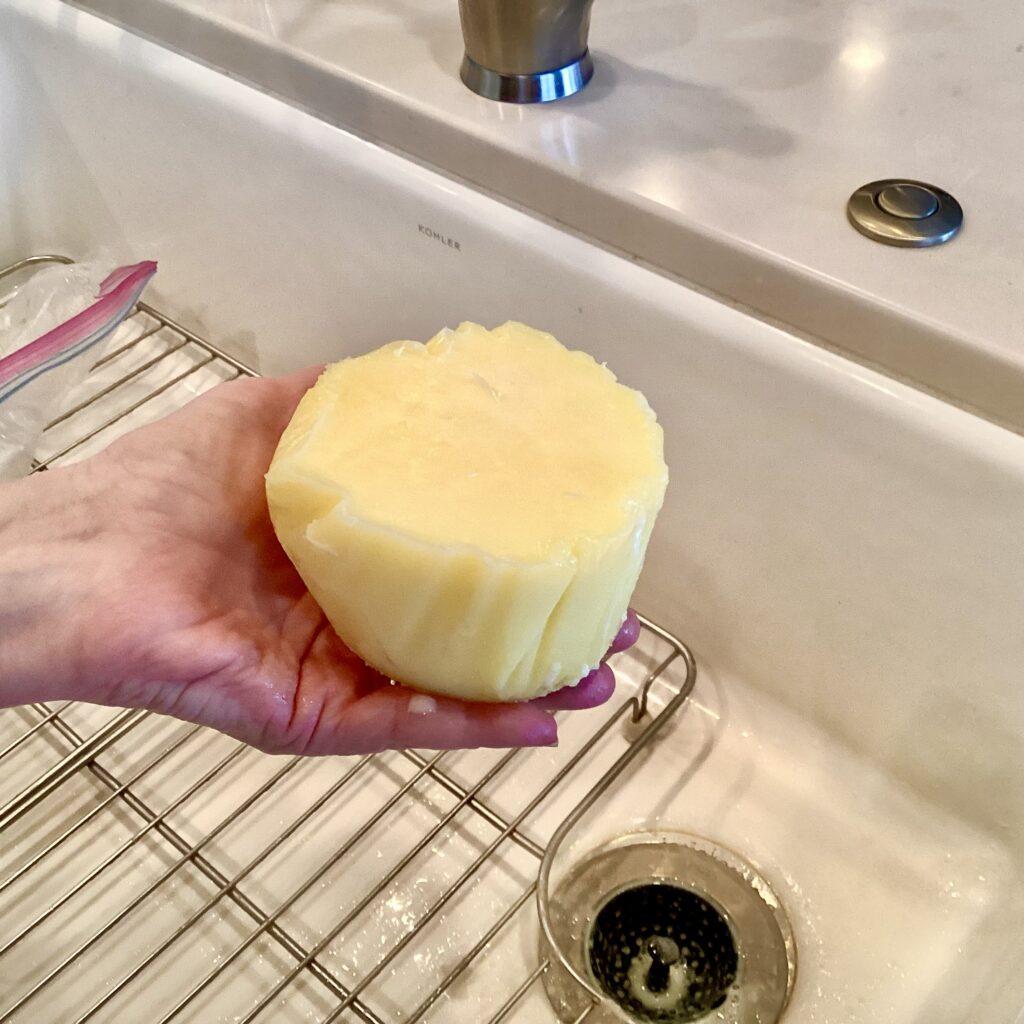 What you have left is now clarified butter, which you can cut into chunks and store in the refrigerator or you can freeze for later.

As a further experiment, I thought I would check the burning point of this method of clarifying butter.

I heated a pan over medium high heat to almost the smoking point, added my ghee to the pan and heated it for several minutes.

If this was regular butter, it would normally brown and then quickly it would burn because the smoking point is so much lower.

But this clarified butter remained liquid with no burning when I emptied it out on a white plate.

As a comparison, I added a store bought clarified butter and did the same experiment and emptied it out on another white plate.

My clarified butter is on the left and the one purchased from the store is on the right. 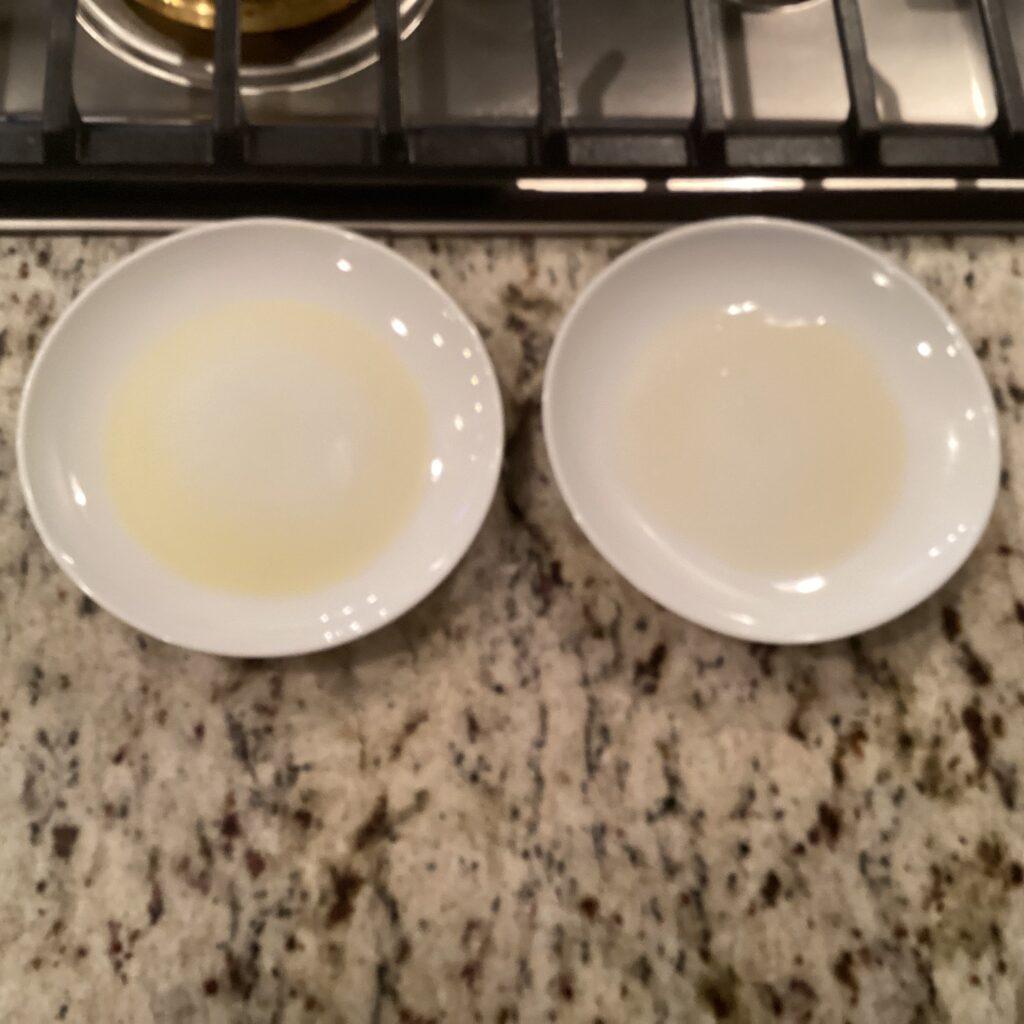 Because I used a salted butter, mine had a richer taste.

So after that experiment, I was curious and decided to compare the calories of olive oil to the store version and then to my clarified butter.

The statistics were all 1 TB measurement from the same source, FatSecret.

But for some reason when you clarify butter, the Vitamin A content beats both the olive oil and the regular butter.

Learn how to make browned butter sauce in these delicious recipes:

Linguini with Scallops and Browned Butter