You are here: Home / Breakfast / Potato Pancakes with Thyme

Potato Pancakes with Thyme are an updated version of an old favorite. These delicious crispy pancakes are perfect served with applesauce. 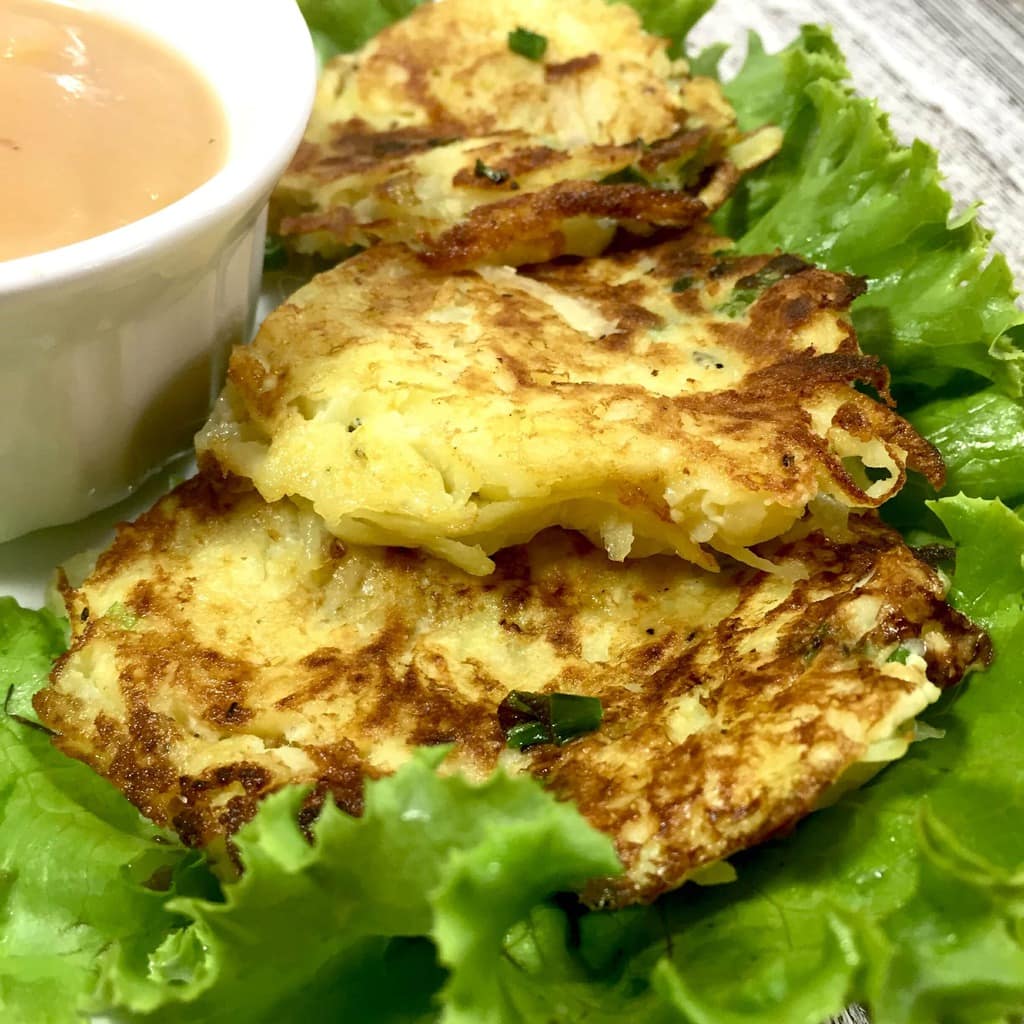 About Potato Pancakes with Thyme

The humble potato. And yet in the hands of creative chefs throughout the world, magic happens.

You get instant deliciousness with dishes such as Potato Soufflé, Vichyssoise, Pomme Frite, known in America as French Fries, and so many more.

Potato pancakes have been around for a long time.

Although the basic preparation always begins with grated or ground potatoes, many countries have their own variation of the recipe.

In Ireland, potato pancakes are known as Boxty. They often add baking soda and buttermilk for a creamier pancake.

In Britain, they’re called Potato Cakes, and instead of baking soda they add flour and eggs.

In Germany they are called Reibekuchen or Kartoffelpuffer, served with applesauce.

And in France Pommes Darphin is as large as a pan and is served in pie-shaped wedges, often topped with creme fraiche. 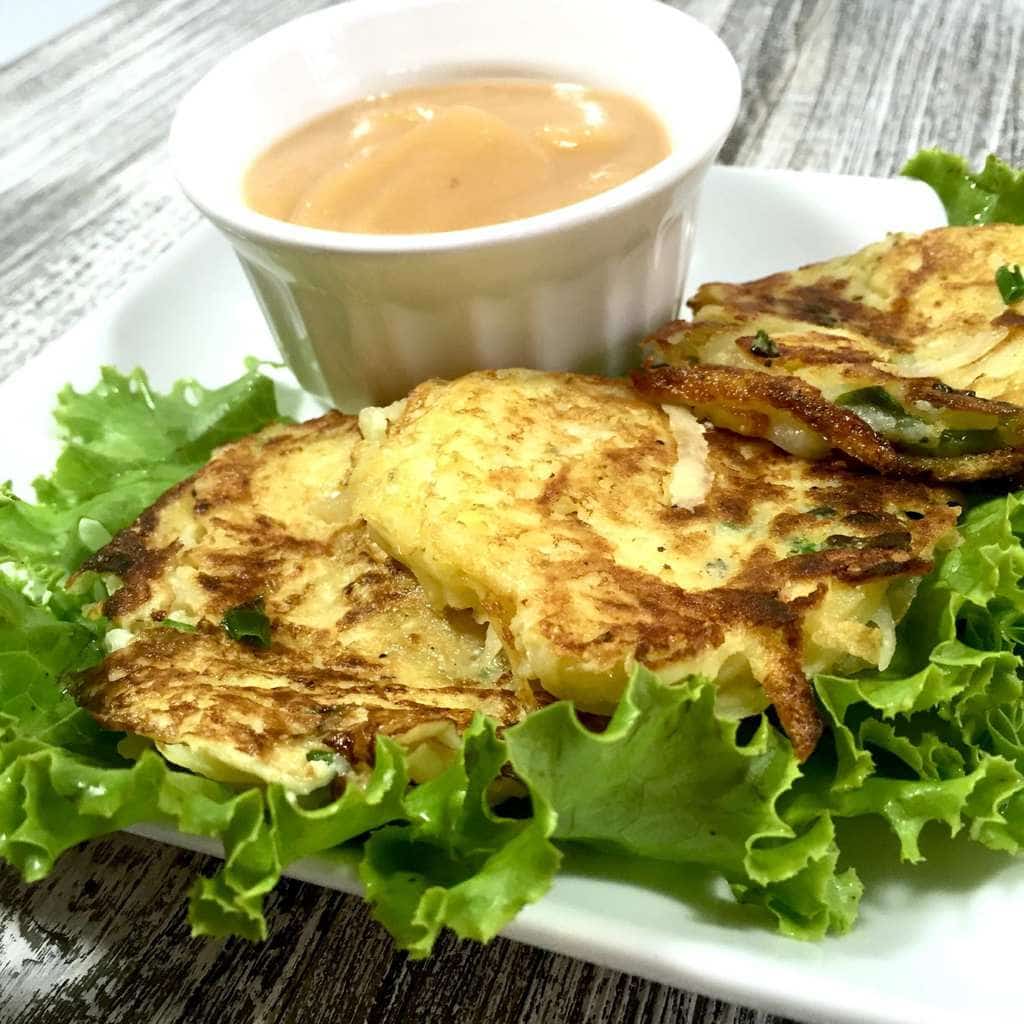 In Czechoslovakia, Bramborák is made with grated potatoes, egg, breadcrumbs, garlic, marjoram and sometimes caraway seeds.

In Iran, they add eggs, onion, saffron, garlic chives and sometimes cinnamon to their shredded potatoes.

And in Poland, their Placki Ziemniaczane is a centuries old dish that was served as a food staple at the 17th century a Polish monasteries.

This dish had grated potatoes, onions, eggs, wheat flour and was only served with salt and pepper.

In recent years these pancakes are served in a variety of ways – with sour cream, applesauce, mushroom sauce and even fruit syrup.

Much like the Polish they are made with grated potatoes, eggs, and wheat flour. But these pancakes are served with fried cured pork belly and lingonberry jam.

The Korean potato pancake, Gamja-jeon, is a mixture of grated potato and potato starch and often mixed with onion, chillie and perilla leaf and served with soy sauce. 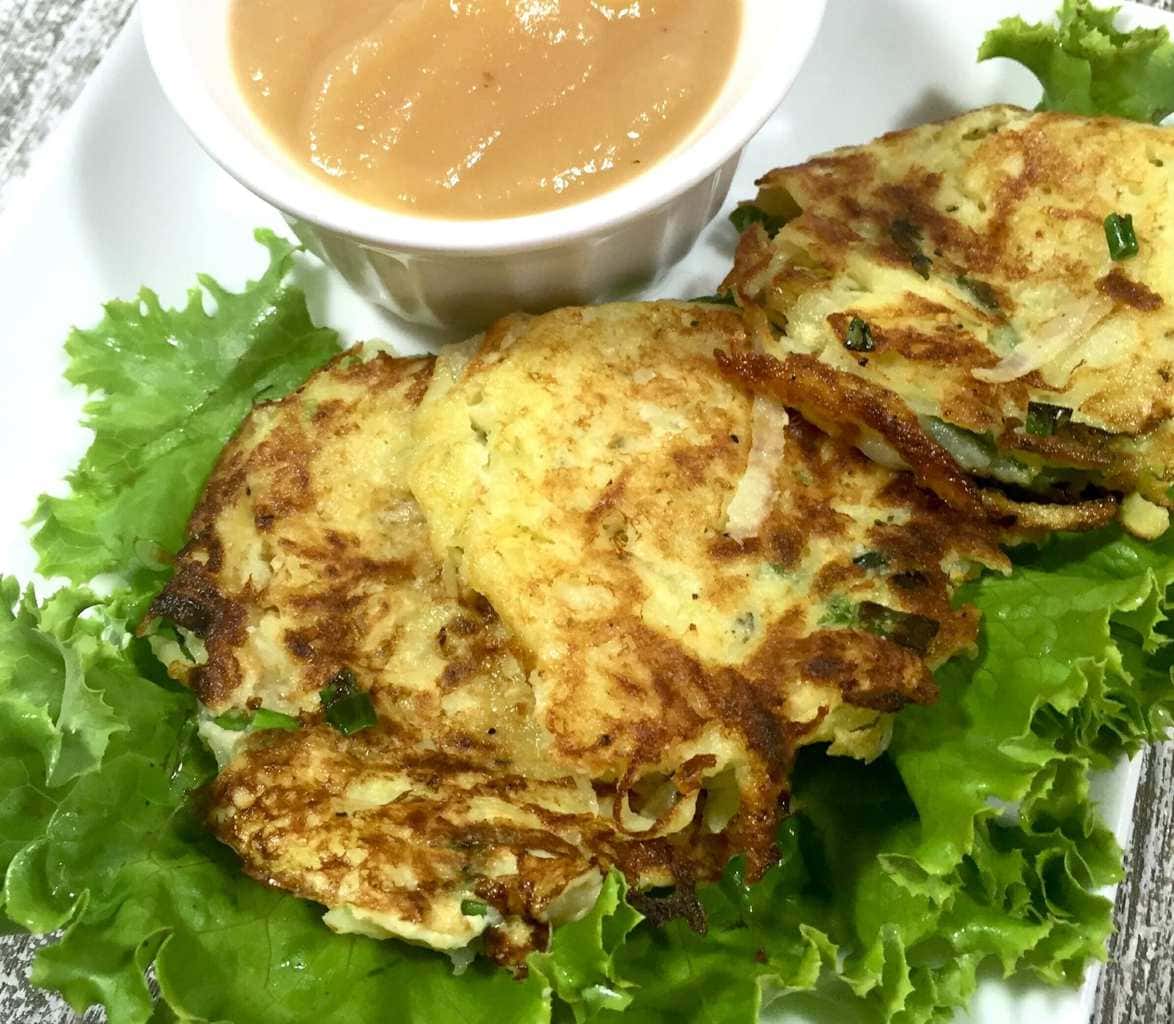 I think the most famous potato pancake is the Jewish Latke, which has been served as part of the Hanukkah celebration since the mid-1800’s.

Before the potatoes came on the scene though, the latkes actually originated from an Italian recipe for a fried ricotta cheese and egg mixture.

My version of Potato Pancakes with Thyme is semi-traditional with flour, egg, scallion, garlic salt.

Adding thyme leaves I think just makes it taste even better and, instead of deep frying I cook them in 1 tablespoon of olive oil and 1 tablespoon butter until they are crisp and wonderful.

So let’s make them

Ingredients of Potato Pancakes with Thyme

How to Make Potato Pancakes with Thyme

First, grate the potatoes and add them to a large bowl of water to remove the starch.

To make it easy, I just grate the potatoes over the water bowl. Let  them soak for about 15 minutes.

Add the potatoes to a clean towel and pat to dry as much as possible.

Then, add the potatoes to the bowl you previously used, add in the flour and mix until flour is evenly incorporated.

In a smaller bowl, whisk an egg. Then, add in the garlic salt, pepper and thyme and whisk.

Finally, pour the egg mixture over the potatoes and with a large spoon, combine the mixture.

Then by heaping spoonfuls, add the potato pancakes into the pan.

Depending on the size of your pan, you should be able make 4 pancakes at a time.

Then flip them over and continue cooking another 3-4 minute. 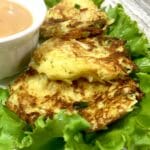