You are here: Home / Pork / Pork Piccata with Tarragon and Rosemary

This Pork Piccata with Tarragon and Rosemary is tangy, totally melt in your mouth delicious and is ready in under 15 minutes.

One of my favorite dishes at Brio Tuscan Grille is Chicken Limone, which is basically Chicken Piccata. My version of this dish is  Lemon Chicken with Capers and I can’t seem to get enough of it. Lemons just make everything taste fresher. Some Piccata dishes use veal, but since I have a huge fan of pork in my house, especially pork chops, well I had to convert this dish to Pork Piccata with Tarragon and Rosemary.

In my Lemon Chicken with Capers, the chicken was perfect with its briney buttery lemon sauce all by itself. But I thought the pork needed an additional flavor. Maybe an herb that would compliment the lemon, the butter, the olive oil and those tangy capers. You can’t leave out the capers. They make the dish.

So as I thought about all those wonderful flavors of the Mediterranean, Rosemary came to mind first. It’s perfect with pork. In fact it’s an ingredient in Pork Tenderloin with Rosemary, Fennel and Sage. I knew I only needed a little because too much would overwhelm the dish. Then I thought about tarragon, which would be a great counter balance to the Rosemary. Unlike Fennel, which has a very pronounced licorice flavor, tarragon has a much milder slightly licorice flavor. So Tarragon it would be.

Well, the the flavors came together beautifully. The Southern boy who adores his pork chops so much was totally happy. And the the best part about Pork Picatta with  Tarragon and Rosemary was how really easy and super fast it was to make. 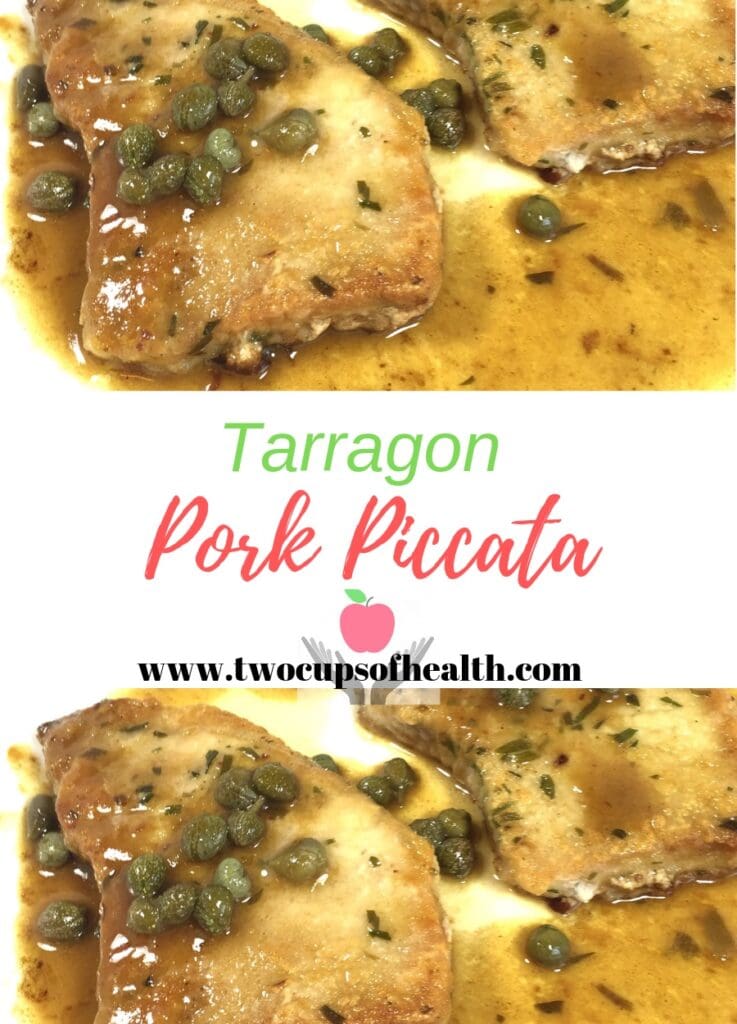 Ingredients of Pork Piccata with Tarragon and Rosemary

How to Make Pork Piccata with Tarragon and Rosemary

First, mix the flour, sea salt, pepper, tarragon and rosemary on a plate.

Next place the pork chops between two sheets of plastic wrap and pound with a meat mallet t0 1/4” thick. Then dredge the pork chops in the flour and herb mixture on both sides.

Add butter and olive oil to a frypan over medium high heat. Then add the pork chops and cook 3-4 minutes on each side until browned. Remove them to a serving platter.

In the same frypan over medium heat, add wine and lemon juice. Stir up the browned bits from the bottom of the pan. Great flavor in these browned bits.

Allow the sauce to reduce about 4-5 minutes. Then stir in capers and cook for 1 minute.

Pour the sauce over the pork chops and serve.

Pork Piccata with Tarragon and Rosemary

If you liked this recipe, please leave a comment below!

Previous Post: « Discover Why Grassfed Beef is Much Healthier for You Than Organic
Next Post: Easy Roasted Brussels Sprouts »